For the IMQG March Challenge, I was able to make three thread catchers from two fat quarters and was left with an 8" by 22" strip of the two fabrics.

Cathedral Windows is a favourite pattern of mine.  A member of Craftsy recently sent me a pattern for Star Windows which uses a similar technique.  I decided to experiment with this pattern, so I made templates for the window and pane.

The templates were traced onto the wrong side of the solid fabric (three times), the two fabrics were placed RSF (right sides facing) and sewn by machine.

After the first one was sewn, I discovered that the patterned fabric was facing the wrong way.  Thank heavens I noticed it before all three were done!  It had to be taken apart, re-layered and sewn again.

The windows were sewn all the way around for a reason.  After deciding where the opening should be, I marked the area with two pins and back-stitched at the pins and sewed across the opening.  This was so that the flaps for the opening could be pressed apart to make it easier to sew after turning it right side out.


The opening was taken apart after pressing, turned right side out and pressed.  Using the hexagon or pane template, the petals were turned down and sewn in place creating three Star Windows. 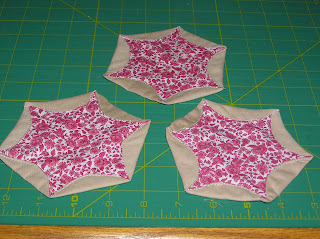 I plan to make a king size quilt (108" by 108") of this pattern one of these days, using black fabric for the background or windows and Kona bright solids for the interior panes.  This is how the Star Windows would be assembled.

From point to point each of these units measures 5 inches.  These are the first mug rugs I've made.

Thanks for stopping by. I love to hear from all of you, so please feel free to leave a comment.

If you have a question I'll reply to your comment. If you prefer an email response, please mention that and make sure your blogger profile is linked to your e-mail, otherwise I won't be able to e-mail you back.

Please note that any and all comments posted by 'Anonymous' persons are deleted without exception as a means of nuisance abatement.

Thanks so much for reading and commenting on this post. 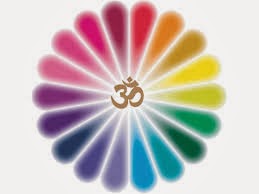 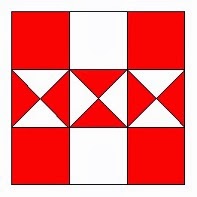 Do you back up your blog? Find out how here.
Is your blog print-friendly? Here are the instructions.
Here is a tutorial for creating a collage from your photographs to help tell a story.

Add your blog to this linky party 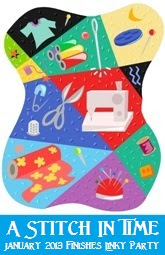 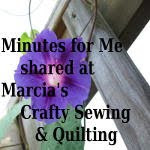 2013 The Year of the Finished Project

Never Too Hot to Stitch

Block of the Month

Add Your Quilter's Blog To This Directory

I Am A Canna

"You stand up for what you believe in, even if it gets in the way of what other people think. You are proud of yourself and your accomplishments and you enjoy letting people know that."

Craftsy Block of the Month